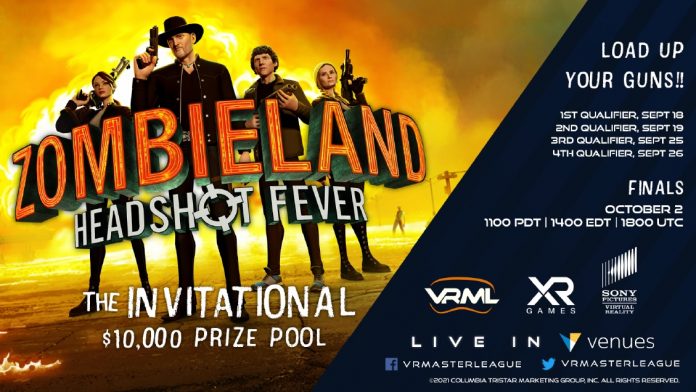 VR Master League (VRML) continues to take steps forward in showcasing VR esports by announcing: On October 2nd, the Zombieland VR Invitational will be brought to you by VRML. With over $10,000 in cash prizes to compete for, all zombie slayers will want to be reporting in to showcase their raw shooting skills.
VRML has always been at the forefront of competitive VR gaming. Founded in late 2016, VRML began within the Onward community as a group of players who wanted to organize games on the weekend. From there, it expanded to include a variety of VR games and leagues. As one of the most collaborative brands in the industry, VR Master League has had the pleasure of working with some of the most forward-thinking companies, developers, and tournament organizers in the industry, such
as ESL, Oculus, Cloudhead Games, Cybershoes, and now XR Games.

Inspired by light-gun games of the 90s and the racing games of today, ‘Zombieland VR: Headshot Fever’ rewards skill, speed, and accuracy with addictive gameplay, a range of powerful weapons, and its exciting Adrenaline system.

This zombie-killing race sport brings light-gun games into the 21st century! Headshot combos slow the clock, meaning the most precise shooter is the fastest – challenge the leaderboards with skill, speed, and accuracy.

About The Invitational
The Zombieland VR Invitational, or “The Invitational”, will be a true testament of player skill and dedication. Beginning September 18th, players will have 4 chances to qualify for The Invitational. The qualifier events will take place on the following days:

Competitors will have only a 12-hour window to set the highest score on the crossplay leaderboard (different from the in-game leaderboard), which will be displayed at https://vrmasterleague.com/Tournaments/ZombielandInvitational. Also note: Players who hope to move on to the finals must have the ability to live-stream their POV while playing the game. If the winner of a Qualifier event is unable to live-stream their POV of the game, or is unable to participate in the full event on October 2nd, the next eligible individual on the leaderboard will be selected.

On October 2nd, the top contestant from each qualifier will compete against each other, live at twitch.tv/vrmasterleague for a chance at receiving a piece of the $10k cash prize pool. Featuring expert esports commentary and expert zombie slaying, The Invitational will be an event you will not want to miss!

Wouter van den Bijgaart
Even before the first consumer VR headset was introduced, Wouter had already fallen in love with VR and its wide-ranging potential. In 2016, he started his VR Entertainment company, The VR Room, with only 2 headsets in the trunk of his car. In 4 years time, the company has grown to a team of 40 across three venues in the Netherlands, as well as Reality On Demand Studios, a development studio with 8 VR developers.

Physical activity can be an enjoyable experience that enhances one’s life and many people are discovering how to integrate increased activity through...
Read more
News