VR Esports are back in Venues! 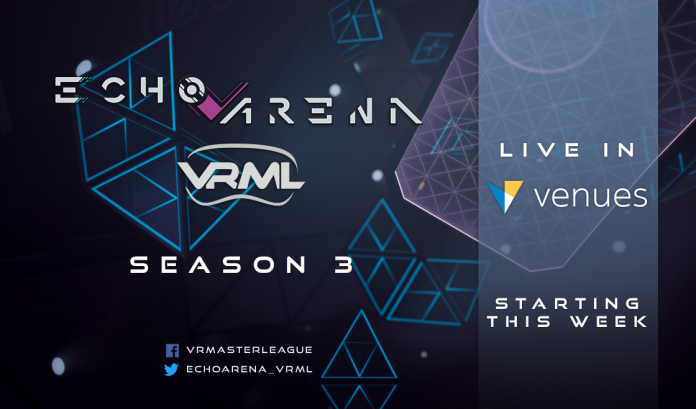 VR Master League (VRML) is continuing to take steps forward in their development of the VR Esports industry. With the continued growth and success of the League, VRML is proud to announce its return to Venues!

Venues has been an increasingly popular way for users to sit down and watch VR Esports matches with friends and family from the comfort of their home. It adds an element of being at a live show and has become an important aspect of the VRML viewing experience. Fans of VR Esports will be pleased to know that VRML is returning to Venues with more shows than ever to keep the VR Esports flames burning strong!

Echo Arena, the exhilarating zero-G title from Ready At Dawn, has quickly become one of the fastest-growing communities within VRML! With its substantial growth in the playerbase in 2020, and with over 300 active teams, Echo Arena VRML community has done a fantastic job of evolving the League and making it a welcoming community to all newcomers.

With the start of Echo Arena VRML’s Season 3, the community has expanded upon its foundations. Last year’s ladder format has been revamped to better serve the needs of the community and its exploding playerbase. Now, the top 10 teams in the VRML are slotted into the Master Division and face off against one another in a round-robin style of matchmaking over the course of five (5) weeks (one cycle). In addition to the Master Division, the Echo Arena VRML maintains its flexible ladder system for players of all skill ranges. Ranging from the Bronze Division to the Diamond Division, the ladder is a space for anybody to play Echo Arena, competitively, against equally skilled opponents. At the end of every cycle in Season 3, VRML hosts a Challenger Cup in which the bottom two (2) teams from the Master Division face off against the top 4 teams from the Diamond Division. The top two (2) teams at the end of the Challenger Cup move on to compete in the Master Division for the next five (5) week cycle. With a total of three (3) Challenger Cups throughout the regular season, there are plenty of opportunities for players to rise through the ranks to become number one! Echo Arena VRML’s first Challenger Cup will take place February 13th.

If you’ve never seen Echo Arena VRML in Venues before, with it’s theater-sized virtual screen and real-time social interaction with other fans, it’s an enriching way to experience the games while in VR. To join, you can download the Venues beta directly from the Oculus app store. Once you’re in, you can sign up to be notified of upcoming events and receive alerts in your headset when they go live!

Continuing on the theme of expansion, an additional 15+ casters were added to help contribute and cover the hundreds of live matches happening every week.

Additionally, more passionate people from the community have also risen up to apply in the very first VRML Content Creation Team. Fans can now watch interviews of players, highlight reels, and game meta breakdowns as well as the high action gameplay. All interviews, highlight reels, and past broadcasts are posted on the Echo Arena VRML YouTube channel.

With its high accessibility, community focus, and unprecedented levels of quality VR Esports coverage, Echo Arena VRML community has helped grow this zero-gravity phenomenon into a flagship in VR Esports.

VR Master League’s primary mission is to create a fair, community-driven, and welcoming, competitive environment for its members. Founded in late 2016, VRML began within the Onward community with a group of players who wanted to organize games on the weekend. From there, it expanded to include a variety of VR games. Each league has a roster of dedicated community members who volunteer their time and services to help shape the League around the VR game they love. The VRML website includes a flexible scheduling system and makes it easy for anybody to join at any time during the regular season. In addition, VRML actively looks for opportunities to help train those who want to learn and be more involved, whether it be through broadcasting, league moderation, content creation, etc. As one of the most collaborative brands in the industry, VR Master League has had the pleasure to work with some excellent companies, developers, and tournament organizers such as ESL, Oculus, Cloudhead Games, Cybershoes, and more. Everything VRML has been able to accomplish would not be possible without the hard work and passion shown by the members of its communities.

The Oculus team at Facebook Reality Labs lets people defy distance—connecting with each other and the world—through world-class VR hardware and software. The Oculus content team pursues the creation of best-in-class games, social and narrative experiences, and new VR use-cases like fitness, productivity, and travel. Oculus joins other teams at Facebook Reality Labs dedicated to building the next computing platform centered around people. Facebook Reality Labs is committed to driving the state of the art forward through relentless innovation.

Physical activity can be an enjoyable experience that enhances one’s life and many people are discovering how to integrate increased activity through...
Read more
Events