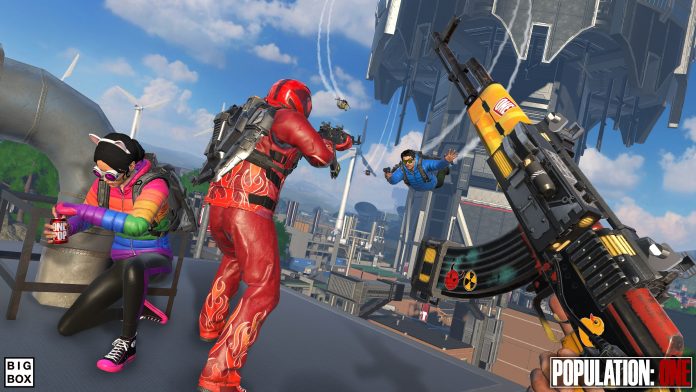 Welcome to the second of the series VR Esports Gaming, where we look into the hottest games that are compatible with virtual reality esports. Previously, we reviewed Tower Tag in the series. Today, we’re looking into a game that we love playing and streaming. It’s no doubt one of the biggest VR games out there right now: POPULATION: ONE! Developed by BigBox VR, it can easily be considered the best VR battle royale game.

POPULATION: ONE recently came out on Oculus Quest and Rift platforms with cross-buy support, as well as on HTC Vive, Windows MR and Valve Index for $29.99. It’s been one of our favorite games to play and stream ever since. Let’s look more into what makes it the awesome game that it is.

Now, we especially love POPULATION: ONE due to the unique Vertical Combat System, which gives players the freedom to climb anything, fly anywhere, and fight everywhere. Abilities you have as a player are practically limitless. This freedom is one of the biggest reasons the game is loved so much. It makes the game so immersive that you feel like you’re inside the battlefield.

Due to this system, a lot of strategy comes into play as well. You have to use the environment creatively to gain the high ground advantage. You have to think strategically to alter your surroundings with strategic cover to protect your squad. This requires a lot of experience in the game, and the fun increases tremendously when you figure the game out.

It’s also important to mention the social environment of the game. You can go and fight with people teaming up with your friends. If you want to get to know new people, you can team up with random people in the lobby. This is especially fun if you team up with players who are as good as you. POPULATION: ONE starts to get really competitive as well, with more and more players starting to play and master the game. There’s a huge community being built behind the game, with more than 3700 followers on Twitter and over 8000 members on Discord.

The game has some pretty cool features, but how does it work? Well, there are 18 players in each match, divided into 6 squads of 3 players. Each squad can talk to each other, but can’t hear other players talking.

The game works as a battle royale. You drop to wherever you like on the map, with a pretty cool flying experience. As a team, your aim is to eliminate all other teams. The team is eliminated only if all their members are dead. Otherwise, dead players can be revived.

You go around the map, picking things like new guns, ammo or shields. When you kill a player, you can pick up their items. In addition to other teams, you have to watch out for a shrinking zone as well. You start losing health when you’re left outside the zone.

It’s wise to move as a team, because you can give each other better guns, revive each other or simply outnumber other players. In the game it feels like your squadmate is right next to you; you can fist bump (and invite them to your friends list) after a great win!

POPULATION: ONE and VR Esports

Even though POPULATION: ONE was released a little over a month ago, players have already mastered it. It’s getting pretty hard to keep up with the competition for the newbies. The game requires a lot of experience next to skills, meaning it needs a lot of training as all esports do.

High-level players are even forming their own teams and tournaments are taking place. The game hasn’t been set up by the developers for events yet and you can’t create private lobbies. However, fans of the game are working around this problem and creating their own tournaments. This shows that the game has a really passionate community behind it that’s driving it towards VR esports.

One of the most recent tournaments was the POPULATION: ONE Tournament Club, which was organized by the fans of the game. It was really great to see the enthusiasts take the initiative to hold a tournament. In the tournament, five consecutive matches took place within one hour. From the VREsports.com team, Wouter also joined the tournament and ranked second! We also streamed it on our Twitch channel and uploaded the full video on our YouTube channel.

Obviously, battle royale games like Fortnite are extremely big in esports due to their suitability and competitive nature. Since POPULATION: ONE is a VR game, it’s already more interesting than most battle royale games. However, it’s important to point out that the game is not simply a VR version of the battle royale games we know; it adds more features and the gameplay is much more addicting.

It looks like POPULATION: ONE is going to become one of the go-to games for VR esports. As BigBox VR improves the game for private events, larger tournaments with more players and higher prize money will start taking place. It’s exciting to see a game so suitable with VR esports grow so fast.

If you want to find out more; Sonya Haskins, VR esports journalist and a moderator for the POPULATION: ONE Discord community, will share an interview with Chia Chin Lee and Gabe Brown on Friday, December 4. You can check it out on her YouTube channel. Also let us know in the comments which game you want us to review in the next edition of VR Esports Gaming!

Cops vs Robbers becomes the first to join forces with Hero Zone to give VR operators a one-launcher-fits-all, pay-per-play solution.
Read more
Events